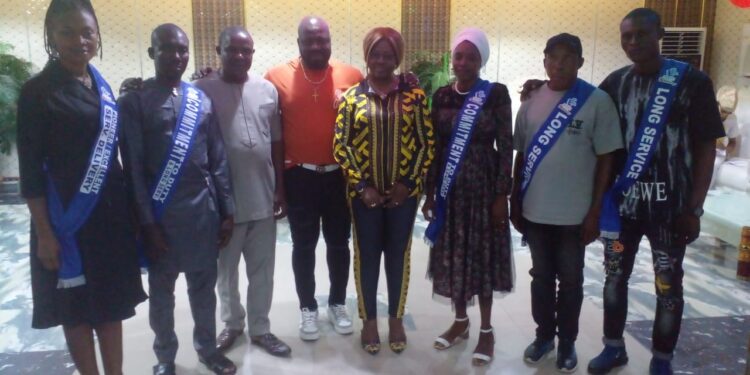 It was a day of joy, reward and jubilation for Staff of E& C logistics limited, as the Director, Mr. Johnmary C. N. Anogolu rewarded the most diligent Staff, Long Service Awards, most outstanding Departments and Partners with Cash, gift items and promotions.
The event which took place on Saturday, April 9, 2022, at New Planet Resorts Limited, Lagos, was to mark the Company’s yearly staff awards and party.

The beneficiaries went wild with jubilation, as they got double of the cash reward. One from E & C Logistics Limited and another from the CEO, New Planet Resorts Limited. They stressed that in spite of the nation’s economic and security Challenges, the Director, in his usual way, still rewarded the Staffs.

The event had in attendance, some partners of the company, namely, Ogunyemi Jeremiah, Nneka Nwaizugbo, Jecinta Agu, Mbadugha Benedicta, Aloysius Chinedu and many others.

Giving an insight on the birth of the company, Mr. Pious Jukpor, the Human Resource Manager, said that the company started operation in March 2005, in People Republic of China, with the production of building materials, purchasing agency, aircargo, and shipping.
He said that Mr. Dicky Lin from Guandong China gave birth to Easy Way, while Chudybest General trading kicked off from Dubai in same year 2005 with similar business.
The initiator of Chudybest, Mr. Johnmary C.N Anogolu, from Olo, Eziagu, Enugu state, having same goal with Mr. Dick Lin, decided to join his vision with that of Mr. Dick in 2010, in China.

Their coming together gave birth to the Multinational company known today as E& C logistics limited.

“Presently, we have grown to a staff force of over 200 personnel in China and Africa, this is excluding about 200 other casual workers involved in offloading containers anytime they arrive”, He said.

Mr. Joseph Oraegbunam, one of the beneficiaries, posited that he appreciate the aggressive support of the company by motivating and rewarding the staff in this hard time. He said that they never expected this year’s event owing to the escalating harsh economic conditions and social unrest in the country, but because the company prioritized the welfare of workers, that prompted the Director to surpass the expectations of workers this year.

Some of the staff were promoted while others also got their salary increased by 50 percent.
Ghana Branch won the best branch of the year, while Customer Care won the best department of the year.
Other departments came shinning with different awards.
All the beneficiaries went home with gifts items and cash.

In his vote of thanks, Mr. Anagolu, said that his secret is impossibility is nothing when God is involved.

He said: ” I am very happy to see every member of E & C Logistics Limited. We started Ten years ago and today we are growing. When we started, we cannot load a half container. But today, we can proud of 76 containers. Like I said, impossibility is nothing but you need hardwork and determination”.

Anagolu advised all the staff who got Cash gift and their salary increased to start buying landed property. He advised those who had land to start developing the property. He said that things are not totally uhuru for the company, but because he wish to see his workers grow to become Landlords, that is why he is denying the many needs of the company to make the staff happy.

The event also saw the CEO, New Planet Resorts Limited Igwe Sunday Nwobodo clutching an award of excellence for his Outstanding contribution towards the growth of E & C Logistics Limited.