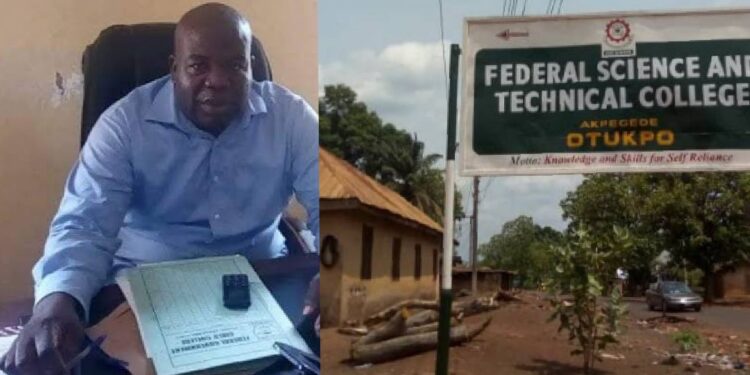 A store officer at the Federal Science and Technical College (FSTC), Otukpo, Benue State, has been suspended for allegedly raping a 16-year-old female student of the school.

The Federal Ministry of Education has also investigated the matter and said the officer may be dismissed from service if found guilty of the allegation. But social activists are demanding more sanctions.

With a student population of 1,193 students, FSTC Otukpo is one of the 104 unity schools established by the Nigerian government towards fostering national unity and cohesion amongst the numerous ethnic nationalities of the country.

The school’s management had suspended Ernest Esly, who is in his 50s, and evicted him from his residence in the staff quarters over the alleged rape of the SSS 3 student.

Some female students had in March reported that the girl (name withheld) sneaked out of the hostel at night and was seen being dropped the following morning by Mr Esly. They suspected she was into a sexual relationship with the store officer and that she had passed the night with him at his official quarters.

According to one of the teachers, following the report, the school asked its disciplinary committee headed by the vice principal in charge of administration, identified simply as Mrs Agbor, to look into the matter.

“They summoned the store officer but he denied having an affair with the student. But after the girl confessed to having sex with the store officer, in his presence, the disciplinary committee recommended Mr Esly’s eviction from the staff quarters as well as his reposting from the college.”

A management staff of the school, who asked not to be named because he is not permitted to speak with journalists as a civil servant, said Mr Esly was given until March 21 to vacate his residential quarters in the school and to submit a request for transfer from the school within one week.

Sources at the school, including students and teachers, told PREMIUM TIMES that Mr Esly had a habit of using his access to food in the school’s store to lure female students into immoral relationships. Many students told our reporter of alleged sexual advances made to them by the store officer.

A 14-year-old Senior Secondary School (SSS) 1 student of the school said she and three of her colleagues were on their way for their dinner one November 2020 evening when they met Mr Esly under a tree in the school compound.

“As we walked past Mr Ernest, he struck a conversation with us and began commenting about our breasts,” she recalled.

“He suddenly moved his hand across my shoulders to my breasts, forcing us to flee as I scrambled out of his arms,” she added.

A 16-year-old SSS 2 student also said she had a similar experience with Mr Esly.

“A group of about five of us ran into him while returning from the dining room. Then he began to make immoral comments about my body features,” the teenager said. “I told him that he shouldn’t be saying that as an adult but he became angry.”

Gate to the female hostels.

Alleged rapist officer “can’t talk to the press”
When this reporter contacted Mr Esly to hear his own side of the saga, he said as a civil servant, he was barred from speaking to journalists.

“I am a civil servant; I can’t talk to the press. I don’t have anything to say. What happened was an internal affair; I don’t know why it got to PREMIUM TIMES. I don’t know what they (the Otukpo school authorities) are talking about.”

Checks by this reporter on Mr Esly’s Facebook account showed that shortly after he spoke with our correspondent, he deleted all his photographs from the social media platform.

School authorities speak
The principal of the college, Bassey Ukpuho, confirmed the incident but said he would not speak on it as he had referred it to the Federal Ministry of Education in Abuja.

College principal, Bassey Ukpuho
“The issue is already at the Federal Ministry of Education. I don’t want to speak on it, please unless there is permission from the ministry for me to speak to the press on this issue,” he said.

Education ministry suspends officer
The ministry of education authorities initially denied any knowledge of the case. When this reporter reached out to the ministry’s director of press and public relations, Bem Goong, he expressed surprise at Mr Ukpuho’s claim that it had been reported to Abuja for appropriate action.

“Certainly, we have not heard about any case of sexual molestation of students from (FSTC) Otukpo,” Mr Goong said.

However, after PREMIUM TIMES formally wrote the Minister of Education, Adamu Adamu, over the matter, Mr Goong told this reporter that the ministry’s permanent secretary, Sonny Echono, had set up a panel to probe the allegation.

“The permanent secretary has set up a panel of inquiry which has submitted its report. We will make the findings of the panel public in 72 hours,” Mr Boong told our correspondent on October 6.

On October 13, the education ministry’s spokesperson in a telephone interview with our correspondent said, “The man (Mr Esly) has been suspended. Since it is a disciplinary matter, it has to go through the procedure: the Senior State Committee will look at it and make recommendations for the final action to be taken.”

“If a teacher is involved in sexual molestation of a child, the punishment is dismissal from service, it is not reposting,” he said.

Commenting on the issue, the national president of the International Federation of Women Lawyers (FIDA), Rhoda Tyoden, described it as “sexual exploitation” of students.

“Any sexual relationship between a teacher and a student is sexual exploitation,” Ms Tyoden told this reporter. “That is another form of gender-based violence. It is an abuse of power by the violator, who is a staffer of the college this time round.

“The store officer is sexually exploiting the schoolgirls and taking advantage of the fact that he is in a position of power and can intimidate them. It shouldn’t be condoned,” she said.

The law stipulates a minimum penalty of 12 years imprisonment away from the judge’s discretion for the crimes. It also recognises sex with an underaged person as rape as they are not mature enough to give consent.

“The punishment for sexual molestation of a child in our school is dismissal from service. Which other punishment are you looking for? Depending on the degree of molestation, you can also be charged to court after dismissal,” the education ministry’s spokesperson said.

Data on sexual and gender-based violence (SGBV) in Nigeria are hard to come by due largely to poor documentation in public institutions.

However, sexual violence is prevalent in the country going by reported cases in the media.

For instance, in 2018, a 13-year-old student of the Federal Government Girls’ College, Gboko in Benue State, Ochanya Ogbanje, was allegedly raped to death by her guardian, Andrew Ogbuja, and his son, Victor, who is still on the run.

A former Nigerian police chief, Mohammed Adamu, had told journalists in June 2020 that a total of 717 rape incidents were reported in Nigeria between January and May of the year.

Mr Adamu had attributed the high number of rape and other sex-based violence to the then coronavirus lockdown in the country.

According to the United Nations International Children’s Emergency Fund (UNICEF); one in every four girls and one in 10 boys in Nigeria, experience sexual violence before the age of 18.

In 2014, findings from a national survey carried out by the National Population Commission (NPC) on violence against children in Nigeria, confirmed that one in four females reported experiencing sexual violence in childhood with approximately 70 per cent reporting more than one incident of sexual violence.

The implication is that of the 99.1 million estimated number of women in Nigeria, 24.8 million may have experienced some form of sexual violence.

Police, NAPTIP, CSOB not aware of incident
While the police in Benue State and the National Agency Against the Prohibition of Trafficking In Persons (NAPTIP) said there was no report of such an occurrence from the FSTC, Alagaba Inalegwu, Secretary of the Parents Teachers Association (PTA) of the college, declined comment on the matter.

The coordinator of Civil Society organisations in Benue (CSOB), Helen Teghtegh, also said there was no report of the incident at the college to her coalition.