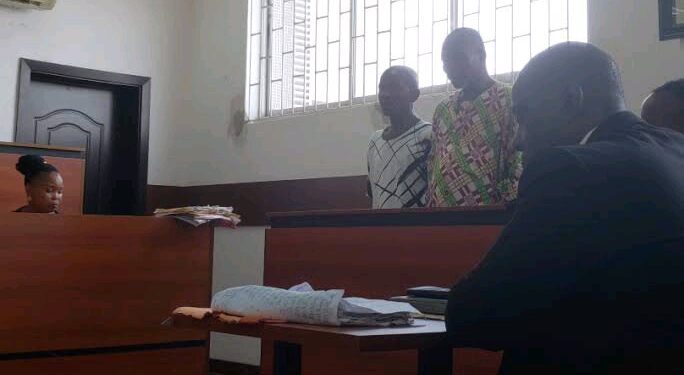 A man recognized as Mayowa Dele, who is 36 years of age and lives in Lagos state, has been charged by the state’s security operatives with the murder of his girlfriend and also harvesting some of her private organs, DAILY TRUST reports.

Shockingly, when he was caught and taken into custody, the suspect, as stated by security personnel, was at the verge of using the removed body parts of the deceased to prepare a concoction.

As stated by the prosecuting attorney for the police department, Thomas Nurudeen,some of the deceased’s harvested organs were discovered inside the pot which the accused set on fire.

However, ASP Thomas, an Assistant Superintendent of Police,disclosed that the incident took place on Ijedodo road in the Ijegun neighbourhood of Lagos,the location where the deceased’s leftovers were retrieved and her name was recalled to be Mercy.

“My Lord, three suspects; Oluwakemi Azeez (20), Oyedegun Adewale (27) and Jejelaye Osusola (22) were also arrested for their alleged involvement in the murder of Mercy”.

“Apart from putting some of the body parts in the pot to cook, he also put some inside a cement bag and kept it in his room while the remaining parts were wrapped up in bed sheets and buried in an uncompleted building in the area”,the prosecutor stated.

Although,the suspect’s major intents behind the evil act is yet to be ascertained by the security operatives.But they raced to the suspect’s location to apprehend and uncover what he was up to,after a distress call was sent to the police via his neighbours accompanied with the discreet findings of the police.

Furthermore,the Assistant Superintendent noted that the above-mentioned intelligence strategy undertaken by the police made it possible to get hold of the culprit,who has been interrogated to know why he went on such a dehumanizing deed.

During the course of interrogation,the prosecutor went on to say that the prime culprit revealed some of his accomplices,who were also apprehended and taken into custody for interrogation.

Meanwhile, when they were brought before the judge for their prosecution,the defendant pleaded guilty to the allegations leveled against them but the magistrate was advised by ASP Thomas to handover the case to the Department of Public Prosecution for their own opinion on the case.

Conclusively, the magistrate, Mr. P.E. Nwaka, issued a directive for the suspects to be taken back to prison for the time being while awaiting the decision made by the Department of Public Prosecutions.