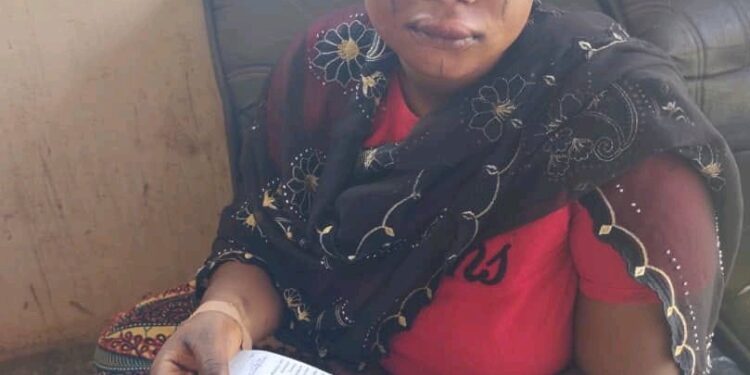 A 30-year-old mother of four, Mujidat Ademola is on the verge of losing her eye after she was allegedly assaulted by her husband in Oyo state over alleged infidelity.

According to a report by one SakiFirst, the mother-of-four was beaten to pulp by her husband, Nurudeen Amao Ariya last week Tuesday, after accusing her of infidelity.

She was rushed to a clinic in their area around 1am and according to Sakifirst, Mujidat bled for hours.

Read the full report below:

“Sadly we have to write this, all our effort to fix it was in vain maybe cos this man doesn’t know he was wrong. We are not here to tarnish SAKI pedigree but someone is dying and we can’t keep shut

“Around 11pm on Tuesday night, there was an argument between MUJIDAT ADEMOLA and her husband NURUDEEN AMAO ARIYA who led to brutality as a result of an allegations by the husband that his wife committed infidelity.

She was transferred to a far clinic from their area around 1am in which the husband was begging the Nurse to cover him up of the ASSAULT.. SAKIFIRST heard the information, then we visited the clinic the following morning.

The damage was much that she was transferred to University College Hospital SEPETERI for proper examination and test.. The convener of SAKIFIRST represented SAKIFIRST to witness and safe the life of the woman.. It was brutal, the blood doesn’t stop from coming from MUJIDAT eyes for hours.. She was later transferred to UCH ibadan.

Ever since, we message the husband,we also called but he refused to respond ever since he dropped MUJIDAT at the hospital that night.. He dropped her and left without looking back till when we are writing this.

Yesterday night, ADEKUNLE M LAWAL the convener SAKIFIRST called him, told him to paid the bill of 120K that was requested for at UCH.. It was a long call which later ended up with arguments cos he doesnt want to pay the bill.. It seems this man doesn’t see what he did as bad thing.

As we are writing this, SAKIFIRST will be attacked cos some still have some excuses to support wife beaters. Weeks ago, someone here in SAKI was dead cos of similar issue.

As we are writing this, the rate at which men beat their wife is at the increase cos we have more than six at hand even after the death of Nimatallahi.. We urge the security agencies to please do their work cos this could be ones daughter, sister or friend that would happened to next time. Make use of family Court if you suspect any infidelity on your marriage

Mujidat 30years old, mother of four is on a verge of losing her eyes cos the doctor said the nerves seems to be affected and she need quick attention.. Mujidat still at saki, i guess cos of money… One of the friend of the husband drop just 50Ksince..

Wife beating is every where but i think our society have to stop it now.. SAKIFIRST was not found for fighting against any gender but we can’t just afford to lose any SAKITE irrespective of how tough the case maybe.

Below are are the pictures of the wife and husband.. We are going to give you the progress later. There must be a scapegoat and NURUDEEN should be. May we have peace in our home, may our society be safe.

Our parents always act as if they dashed out their daughters.. Welcome home your daughter from toxic and failed marriage.. People are dying everyday through assault..