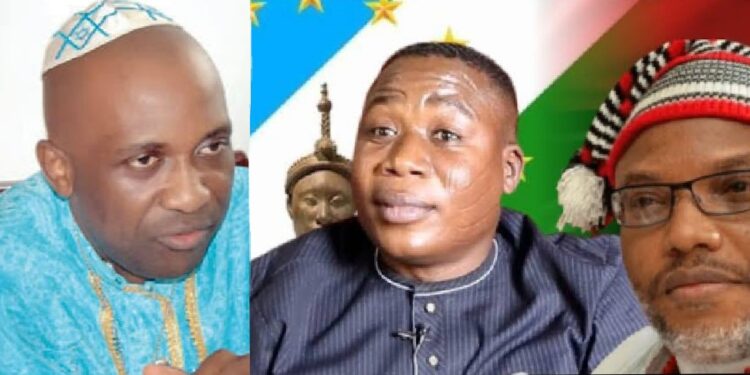 The Sun also reported that Primate Ayodele, urged Nigerians to be watchful and prayerful in the New Year in order to avert looming troubles ahead just as he announced that the first seven days of the year have been set aside for prayers for the nation.

He was quoted as saying, “In the first 160 days in 2022 Nigerians must be very careful and prayerful because of the evil of that period that is why we have set aside the first seven days of the year for prayers to avert the looming dangers ahead. The year 2022 is a year of mixed bag. So as a country we need prayers in order to avert avoidable troubles”.

Primate Ayodele said that contrary to insinuations, the Federal Government has no agenda to kill Sunday Igboho and Nnamdi Kanu, who are currently in detentions, but revealed that the duo might not find it easy as they battle to regain their freedom.

His continued, “Sunday Igboho must calm down. In fact, he needs to change his lawyer. He should look for a new and senior ‘Salami’ to handle his case.

“In addition to that, if Igboho does not handle his matter very well he will stay longer in detention.

“The Nigerian government is so much interested in him. They are not going to kill him, but they are keen on holding him until the end of this administration. So, he must be very prayerful.

“Nnamdi Kanu will not find it so easy as well. He should still expect tough time because the government is not ready to free him for one second. He needs to be very prayerful and watchful this time around. The government does not have any plans to kill either Igboho or Kanu.

“They should put that insinuation aside. Government will employ all sorts of tactics to prolong their days in detention. This year will be a tougher year for IPOB and ESN. There will be confrontations and killing between the nation’s security forces and IPOB and ESN.”

“Some documents will leak from NNPC and that will put the corporation into troubles. This will create problem for the Minister of Petroleum and the GMD of NNPC.

“The planned removal of fuel subsidy will plunge Nigeria into deeper problem. In addition to the hike in price of PMS, Nigerians must also expect scarcity of the product this year. I am seeing protest which can grind Buhari’s government for some time.”

His revelations for the New Year also captured the nation’s politics and the political actors in the country.

Primate Ayodele continued, “I will like to warn Hope Uzodimma not to waste his time and resources on re-election because he will definitely lose.

“PDP will take over the state at the end of next election. APC will not win Cross Rivers although the incumbent governor, Ben Ayade belongs to APC.

“And if the man aspires to run for presidency or Vice President, his dream will not see the light of the day.

“Tinubu will face a lot of trials and complications. He should drop his presidential ambition for better things because God has not ordained him. If anybody puts him there they will just mess this country up.

“Atiku will not make a better option as the president of Nigeria. If PDP gives it to Atiku, the party should bid the 2023 presidency goodbye.

“Kwankwaso wants to decamp; if he decamps to APC, he will just mess himself up,” he revealed.

Concerning the 2023 elections, Primate Ayodele said, “These are the people God revealed to me as presidential and vice presidential materials if they are lucky to be picked.

“In APC, we have people like Zulum, Mala Buni, Governor of Yobe; Boss Mustapha, Malami, Fashola, Aregbesola, Fayemi and Akpabio.

“The endorsement of Osinbajo by Babangida is a waste of time. Osinbajo would have been a good choice, but the northerners do not want him. These are the people Buhari should support. Buhari will not support Tinubu.

“The rotational president Nigerians are clamouring for is not too certain. In fact, power may return to the North if care is not taken.

“Things can change tomorrow, but at the moment this is the list of people God revealed to me. I am still praying to God who among them is going to be the president. I will reveal the person immediately God shows me the person.

“Ogun State governor, Dapo Abiodun, is going to make a lot of mistakes. Amosun will still tackle him. If care is not taken Amosun boys will come back.

“If Amosun can retrace his steps and find a way to bring back his boys, including the disgruntled ones, Amosun boys will take over from Dapo Abiodun in 2023.

“Abiodun will face so many problems. Abiodun’s efforts will not be appreciated because he has stepped on so many toes. “He must strive hard to prevent people decamping from his party and restrain himself from committing more blunders.

“Some people will still decamp to PDP after the APC convention, APC will be shaken. The best chairmanship candidate that can help APC is Suswam.

“The Electoral Bill will not be allowed to fly as expected. The Senate and House of Representatives will still have to be watchful and prayerful. I am seeing a new building for the Senate.

“I see confusion in Aso Rock. Sensitive documents that will expose Buhari’s government will leak. Some Buhari’s cabinet members will be accused of corruption. EFCC will go after some people that have political ambitions and kill their ambitions.”

Speaking on insecurity and crisis in the country, the Lagos-based cleric said: “Nigerians must pray very well so that our military facilities and other sensitive places will not be attacked.

“Boko Haram will strike harder between February and July. In particularly, we must be prayerful and watchful in the months of February and March because of the evil plans of these enemies of the state.

“They should be watchful in Lagos, Abuja, Rivers. Maiduguri, Kaduna, Nasarawa, Zamfara and Gombe.

“The crisis in the Southern Kaduna will rear its ugly head again in 2022 and this will spoil the chances of APC in Kaduna. el-Rufai and Ganduje should not dream to be president likewise I can’t see Yahyah Bello as president of this country.

“There will be more confusion. Let pray so our security operatives fighting insecurity will not go on strike. Nigeria cannot defeat these terrorists without engaging mercenaries.

“There will be an attempt by these terrorists to launch missile attacks against fighter jets.

“So, let us pray not to see a plane that will crash at Murtala Airport or a plane overshooting the runway. We should also pray against NAF plane crashing.

“We must pray so that our military fighting Boko Haram will not be ambushed. Let us pray so that pirates will not attack our Navy on the high sea.

“Let’s pray against the attack on a governor’s convoy, the CBN governor falling sick. Let’s pray for a Commissioner in Ogun State and in Kaduna, Sokoto and in Plateau.

The man of God urged Nigerians not to disregard the COVID-19 protocols put in place by health authorities in the country, saying, “Nigerians must take the issue of Coronavirus seriously. The world will still have to contend with the virus throughout the New Year by having to observe the protocols that are in place.”

VIDEO: “I’m sorry, I was joking”, says lady who claimed she was pregnant for Zazu crooner, Portable

VIDEO: "I'm sorry, I was joking", says lady who claimed she was pregnant for Zazu crooner, Portable