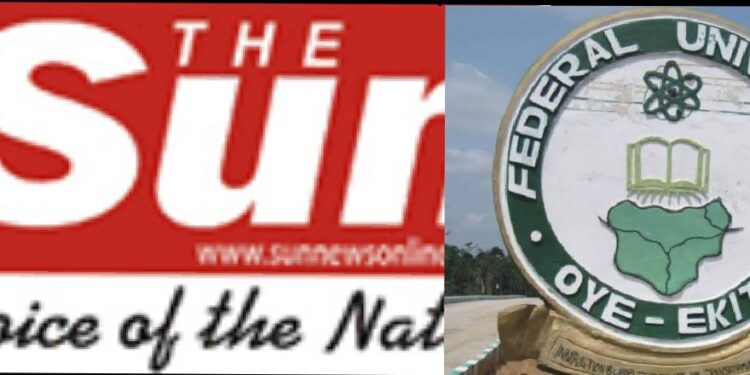 The media team of the Federal University Oye-Ekiti (FUOYE), Ekiti State has carpeted a national newspaper, Daily Sun, over an its deliberate and malicious distortion of facts in a fundamental human rights enforcement suit initiated by the institution’s Vice-Chancellor, Prof Abayomi Sunday Fasina against the Commissioner of Police Special Fraud Unit and two others. Such a biased disposition, which has become the trademark of the news paper since the commencement of the case, is not only against the ethics of the profession that places high premium on professionalism and neutrality, but also portrays the news paper as an interested party pursuing a hidden agenda.

Although the matter had become a subject of litigation, the Daily Sun, for a reason known to it, had allegedly misrepresented facts of the matter.

In an e- statement released by the institution’s Public Relations Officer, Mr. Foluso Ogunmodede and the Special Adviser on Media Matters to the VC, Wole Balogun accused Daily Sun of a deliberate attempt to twist stories with a view to damaging and disparaging the person of the Vice-Chancellor, Prof. Abayomi Sunday Fasina and the Management of the institution.

It reads: “Setting the Records Straight, we bring the full statement bellow:
It has become imperative that the records for the umpteenth time, be set straight regarding malicious, damaging and false reports being peddled against the Management and the Vice-Chancellor (VC) of the Federal University Oye-Ekiti (FUOYE) by the Daily Sun newspapers.

Indeed, one wonders why a national daily such as The Daily Sun would shamefully pre-occupy itself with spreading maliciuos, disparaging, damaging and false reports against a reputable and respected institution such as the Federal University Oye-Ekiti (FUOYE) when other national dailies have always maintained a cordial and civil relationship with the great citadel of learning.

Just recently, precisely November 23, 2021, a news report popped up on the news website of the Daily Sun, against the VC, FUOYE, Prof. Fasina Abayomi Sunday. The report, written by Daily Sun’s Lukman Olabiyi, was titled:”Misappropriation, Court slams N50,000 fine on FUOYE VC for stalling proceedings, and it contained yet same damaging and false reports against the VC for which the national daily had apologized to the institution in the past.

The false contents, which the report claimed were allegations leveled against the VC and for which the police were allegedly after the FUOYE Chief Executive were the same falsehood earlier written by Daily Sun’s Gabriel Dike in an online report on June 22, 2021, titled Alleged Fraud: SFU Operatives arrest FUOYE VC”.

Funny enough, the Daily Sun had published a rejoinder on July 6, 2021, titled: SFU Didn’t Arrest FUOYE VC,” where it also tendered an apology for publishing false report against the person of the VC and reassured FUOYE Management of professional reporting and better relationship in the future.

One wonders then why the latest report by the same national daily would again repeat same mistake and again spread false, disparaging and malicious report against the FUOYE and the VC if not for sinistermotives. It sounds strange that it was only the Daily Sun that has this latest damaging and false report against the VC of FUOYE.

The foregoing double- face by a national daily that should be respected for having integrity, informed this opinion article in which we wish to once again set the records straight for the benefit of unsuspecting members of the public, who would have been misinformed by Daily Sun’s false reports. And in doing this we shall tackle the issues one after the other.

Against Daily Sun’ s false report that the VC, Federal University Oye-Ekiti, Prof. Abayomi Sunday Fasina, was arrested by the Special Fraud Unit (SFU) of the Nigerian police on June 22, 2021, several other national dailies, in their reports, one of which was titled: “FUOYE VC was never arrested, it is corruption fighting back”, had reported the truth about what happened on that day when some strange men, not in police uniforms, who later claimed to be officials of the SFU, invaded the premises of FUOYE and attempted to force their way into the office of the VC, claiming that they had arrest warrant against him without a prior invitation to the VC. A prior invitation to the VC as well as notification about the subject matter of such invitation, has always been the official procedure usually followed by other federal agencies, particularly, the security and anti-graft agencies such as the EFCC and the ICPC when dealing with allegations of such nature against the person of the Vice-Chancellor: It is not an invasion of his office without official protocol. The invasion by the SFU on the premises of FUOYE on that day had created avoidable tension, palpable fear and uproar on the campus as many thought those men were kidnappers!.

Again, the VC was attacked unjustly and unprofessionally. The damaging report reads in part:”…In the suit, Fasina and others are praying the court for an order; declaring that they are entitle (sic) to know and be inform of the details of any Investigation against them by the police.

“They also asked the court to award the cost of N50million against the police as general, aggravated and exemplary damages for the alleged violation of their fundamental rights.

“But the respondents in a counter-affidavit deposed to by SP Sunday Akeregun, asked the court to dismiss the applicants’ suit for being frivolous and abuse of court process.

Responding to the above report, FUOYE Management wish to categorically state that we stand by the report in some national dailies on June 22, 2021 which rightly and truly reported that the police invaded the premises of FUOYE in Oye-Ekiti on June 17, 2021 with an intention to intimidate and harrass the VC without former invitation and notification about the subject of such attempt to arrest him. Truth is that the police never sent any letter of invitation to the VC or any staff of FUOYE to inform them of such development before the men of the SFU stormed the FUOYE premises, creating unneccesay fear and tension, and this is against official protocol. The men of the SFU, who invaded FUOYE premises on June 17, 2021 didn’t even inform the Ekiti State Commissioner of Police about their so-called official duty before they caused the embarrassment to the Nigeria police on that fateful day. On arriving the University premises, courtesy, if not protocol, demands that they should go through the Chief Security Officer (CSO) of the University. They never did, until their sinister plots were aborted by the vigilance and courage of the Secretary to the VC while they were attempting to force their way into the VC’s office.

” …He also stated that the petition against the applicants was not only in respect of frauds allegedly perpetrated as VC from February 2021, but includes his tenure from 2017, when he was Deputy VC in charge of administration till February, 2021 when he became the VC of the Federal University. And that the VC has been heading more than eleven (11) committees as Deputy VC from 2017 to February, 2021

“Before he became the VC, these committees deal with contracts and other financial engagements.

“The deponent also averred that the VC as the then Chairman of TETFund Committee of the University and about other 10 committees, allegedly fraudulently converted to himself and laundered about N13, 864, 925.00 through the son, Fasina Oluwadamilola Tosin, who is a Post- graduate student at Sterling University, Scotland.

“The deponent averred that it was untrue that Fasina and others were being or about to be intimidated. And that the applicants were yet to honour the invitation sent to them regarding the petition . Adding that the petition and documents before his office relate to criminal infractions allegedly committed by the plaintiffs.”

In reaction to the foregoing falsehood, we want to state categorically, that Prof. Fasina couldn’t have awarded any contract or tetfund scholarship as the Deputy Vice-Chancellor (DVC), Administration of FUOYE because such duties fall within the purview of the then VC, Prof. Kayode Soremekun and Tetfund and such awards are given based on merit. So, it is sheer advertisement of ignorance for anyone to state that Prof. Fasina, as DVC, Administration, did such. This further confirms the fact that the Daily Sun is merely spreading this campaign of calumny against the person of the VC for sinister motives yet to be disclosed. We will stop at nothing to unravel this and respond appropriately within the ambit of the law.

Also, the payment of the sum of N13, 864, 925.00 made into the student account of Mr. Fasina Oluwadamilola Tosin, who was then a Post- graduate student at Sterling University, Scotland as well as a staff of FUOYE, was done by the Federal University Oye-Ekiti (FUOYE) and it was Tetfund’s scholarship award won on merit by the beneficiary just as other staff members of the University won the same award. Prof. Fasina’s official duty as chairman of the FUOYE Tetfund Committee and other committees then was merely to assess the applications of staff members who applied for the scholarship. He didn’t perform that duty solely, there were other respected and very senior academic and non-academic staff members who jointly held the meetings and assessed the applicants and arrived at neccesary recommendations to the FUOYE Management and Tetfund before those who benfitted from the Tetfund scholarship for that year, were awarded.

So, it sounds comic for anyone to insinuate that Prof. Fasina laundered Tetfund money, which never entered his personnel bank account, through his son.
Truth is that the young man was qualified as others were, for the Tetfund award and Tetfund found him worthy of it, based on the recommendation by the University Management and Tetfund’s supervising team, and the award was given to him. Tetfund didn’t pay his money into his father’s, Prof. Fasina’s personal bank account, it paid into the University’s account and the University disbursed the money into personal bank accounts of the beneficiaries of the scholarship awards in accordance with the statutory regulations guiding such development. Needles to say that after TETFUND had credited the University’s account, which in turn will credit the accounts of individual beneficiaries. This particular case, like all others in the same group, was no exception.

Again, the Daily Sun’s latest report falsely reads in part:”…Furthermore, the deponent stated that from the available documents in record obtained in the course of investigation of the petition against Fasina revealed that, the VC was involved in fraudulent conversion of funds from Ekiti State University as salaries while he was still receiving salaries as Deputy VC in-charge of administration at Federal University Oye-Ekiti.

The foregoing report is not only grossly misleading but calculated at further damaging the good name of the Federal University Oye-Ekiti (FUOYE) and also the VC, Prof. Fasina. Truth is that even the Ekiti State University (EKSU) Management as well as other anti-graft agencies such as the EFCC and the ICPC that had earlier investigated the same allegation, have absolved Prof. Fasina of any guilt over the allegation of receiving double salaries. There is no iota of truth in such allegation . So, spreading such falsehood again on the pages of a national daily amounts to a deliberate act of witch-hunt against the person of Prof. Fasina by Daily Sun and a contempt of court as the matters are already before a competent court of jurisdiction.”