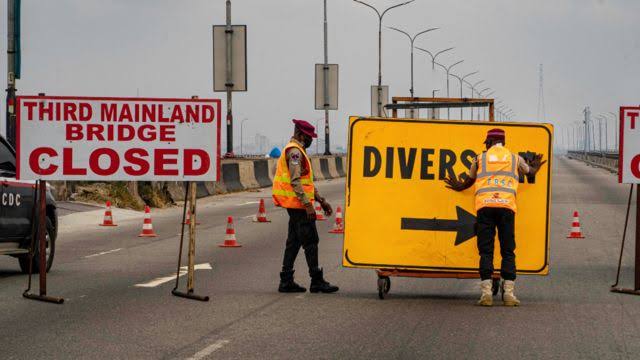 524
SHARES
1.2k
VIEWS
Share on FacebookShare on TwitterShare on WhatsAppShare on Telegram

There is a report that 3rd Mainland Bridge in Lagos has cracked open, which poses danger to commuters.

However, the report reads below;

We have just been informed that part of the 3rd mainland bridge has opened up and the bridge is shaking.

People are advised to avoid the bridge and use an alternative routes available to avoid major disaster ,pls send this to as many people as possible- God bless you as you do so.

Meanwhile, the Federal Ministry of Work has issued a statement saying no cause for alarm.

The Federal Government reacts to the report that recently claimed the upgraded Third Mainland Bridge in Lagos has again “opened up” and was “shaking”.

In the statement made available to the media by the spokesperson of the Federal Ministry of Works and Housing, Boade Akinola, on Monday, the Federal Government said the reports were far from the truth.

It debunked the reports, largely on the social media, that the Third Mainland Bridge in Lagos has “opened up” and was “shaking” and, therefore, unsafe to traffic, adding that the claim was both false and unfounded.

Giving an on-the-spot report on the Bridge, The Federal Controller of Works in Lagos State, Engr. Olukayode Popoola, said he just drove along the Bridge without noticing any opening or experiencing any shaking as contained in the social media report. He advised members of the public, especially commuters, to ignore the insinuations as the Bridge, which is receiving regular attention along with others across the country, is safe for use.

However, a video by Channels TV which is presently trending online shows that there is a need for urgent attention.