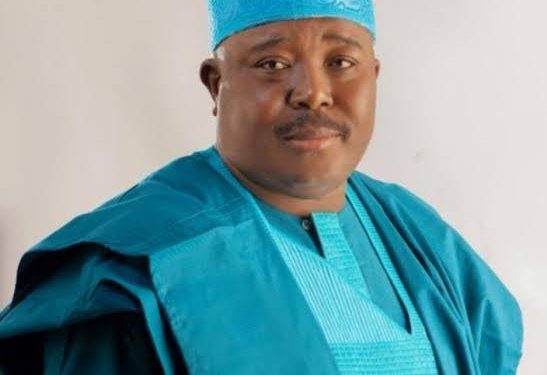 Barr Sharafadeen Alli, the 2023 Oyo South Senatorial candidate of All Progressives Congress, has assured the people of Mokola Market community of Ibadan North Local Government that he and other APC candidates, particularly Sen Teslim Folarin, the APC gubernatorial candidate, are promise-keepers because they appreciate the value of Grassroots support.

The grassroot politician and legal practitioner, who was not only the first Executive Chairman of Ibadan North Local Government, a former Secretary to the Oyo State Government, et cetera, but also currently the Maye Balogun Olubadan, was speaking at the handing over of a borehole he upgraded from a regular, hand-fetched well into a borehole.

About thirty-one years ago, during his stint as the first Executive Chairman of Ibadan North Local Government, Barr Sharafadeen Alli had sunk the well in the Mokola Market community for the use of the people. On the request of the community, he had now funded the upgrade of the well into a motorized borehole, powered by electricity. He also donated a brand new generator to power the pumping machine, in the event of a power outage.

In his address to the people at the ceremony, Barr Alli said, “My coming here is a homecoming. As a Senator, I will be representing ninety-nine wards but I cannot forget my home. I want to assure you all that with your choice of APC, you’re on the right path. But for just two people, everybody who had ever been Chairman, Ibadan North Local Government are here with us in the APC right now. To mention a few, you have myself the first, Hon Demola Omotoso who is here with me, Alh Omilabu Ghandi, and all the others. It is the same story with most of everybody who had ever represented Ibadan North Local Government in the Oyo State House of Assembly. But beyond all that, in our party, we recognize people and we are promise-keepers because we appreciate the value of Grassroots support. That is why all of us candidates have been listening to your requests and answering them. Hon Olaide Akinremi and all the good things he has been doing are known to you. So also is Stevo, you are aware of the many benefits he had been bringing to your ward and other wards, even though he is yet to be elected. On my own part, this borehole is just the starting point, there are many more things we will still bring here when we are elected and we are in office”

In response to the request of Mokola youths for employment opportunities, delivered by Mr Abiodun Adejare, their Youth Leader, Barr Alli reiterated, “We are promise-keepers. As far back as 2005, as Secretary to the State Government, we had the opportunity to facilitate the employment of 5,000 teachers, however employment opportunities today are not as readily available as it was back then, due to the number of graduates our tertiary institutions churn out regularly these days. So I can let you know that not everyone will be employed in one day, but gradually we will reach all. Our incoming Governor, Senator Teslim Kolawole Folarin has a comprehensive plan to grow the Oyo State economy via massive investment in agriculture and the agricultural value chain and this will create a lot of job opportunities that will draw in our teeming youths who will be housed in modernized farm settlements. We therefore appeal to you to vote our party, the APC across board, from Asiwaju Bola Ahmed Tinubu, to Sen Teslim Folarin our Governor, to my humble self, to Hon Olaide Akinremi, to Hon Adebowale Adeyoju and Hon Mustapha Salaudeen. In our nation, states having governors on the same political platform as the president enjoys goos governance more, let us have that benefit too, here in Oyo State”.

Barr Alli proceeded to distribute packages of food stuffs to numerous widows in the community before the official handing over of the borehole as well as the generator to the community.

Hon Demola Omotoso, in addressing the gathering, pointed out the fact that he has a long standing relationship with the people of Mokola Market and he has a history of responding to their needs, “Our relationship with Mokola Market didn’t start today. In the past, we have responded to your needs and calls. However, APC has become our party in the South West and APC will benefit us all. The first thing a politician needs to learn is to recognize people. The person we gave the government to does not recognize people, but we, me, Sharafadeen and Teslim Folarin, we recognize people. We have not come to say what we cannot do. See what Sharafadeen and Stevo have been doing, without being elected yet. They will do more when you elect them”. Alhaja Laide and Hon (Engr) Ojo Jimoh also spoke glowingly of Barr Sharafadeen Alli and the APC.

Earlier, speaking on behalf of the Mokola Market community, Mrs Adeoye Bayo Azeez (nee Adisa) had prayed for Barr Sharafadeen Alli’s success at the polls, while encouraging him to do more for the market community.