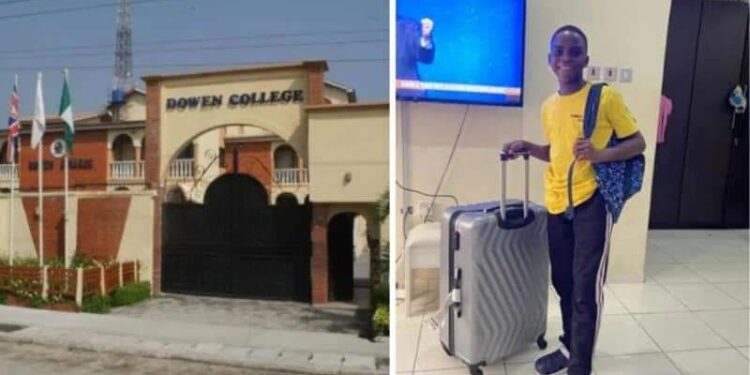 494
SHARES
1.1k
VIEWS
Share on FacebookShare on TwitterShare on WhatsAppShare on Telegram

Wikipedia has named Down College, the school where Sylvester Oromoni was killed by cultist schoolmates as co-education cultist school.

Meanwhile, faces of the alleged killers of late Sylvester Oromoni, the 12-year-old student of Dowen College, Lekki, Lagos has emerged online, also revealed were the faces of the top management staff of the school.

Reports had it that Oromoni was bullied and beaten by fellow students. The supposed injuries from the beating led to his death, according to a Twitter user with the handle @perrisonoromoni, who claimed to be the boy’s cousin.

However, in a statement on Wednesday, the school denied all allegations stating that Oromoni was neither bullied nor beaten but only complained of hip pain after playing football.

Contrary to the school’s statement, the victim’s cousin rolled out photos and video evidence, which corroborates the fact that the child was bullied and beaten; an activity that led to his death.

According to the bereaved father in a live video interview with Punch news online , he and his wife transferred their deceased son to Delta State where a series of tests conducted and ”last-minute open confessions” by the late 12 year old Sylvester confirmed that he was molested and violently abused by five senior students in the school. He mentioned the names as Joseph Benjamin, Michael Kashamu, Anslem Temile while he said he couldn’t recognise the other two because the lights in the hostel room were switched off by the boys before they started beating him up. A dying Sylvester also revealed that the boys warned other students in the room not reveal what took place threatening to kill anyone who violated their order. The five boys further directed the fear grippen students to lie that Sylvester sustained injuries while playing football if queried by the management of the school.

The father of the deceased Dowen College student, Sylvester Oromoni Jnr, who bears the same name, has revealed some of the atrocities his son went through in the school.

In an exclusive interview with The Cable, Oromoni Snr revealed that his son was subjected to severe bullying, disclosing that the boys who allegedly bullied Oromoni Jnr had been reported to the school management the previous term.

He said, “My son suffered. His birthday is next tomorrow (Dec 4). I’ll celebrate it. I’ll have a cake baked. I’ll cut it on his behalf. The boys they mentioned were also reported to the school last term when they bullied Junior and collected all his foodstuffs; clothes. I have two daughters, one of whom graduated earlier. I had to remove the second after this incident. They asked this boy to describe the sister’s privates and this got to us.”

The boy’s father also revealed to The Cable that Oromoni Jnr had been issued death threats if he ever revealed what happens to him in school.

He also stated that contrary to what Dowen College had said in a statement addressing the incident, the family friend who they sent to pick up Oromoni Jnr from the school described a totally different situation.

“They put fear in him so much so that, when you ask him, he might keep to himself and say, ‘they will kill me’. This way, we didn’t know what to do. I considered removing him, reconsidered since his sisters were still in the school,” Oromoni Snr told The Cable.

“The new incident came to my knowledge on November 21st after the school called my wife to notify us that our son was in the school clinic, injured. My senior son, who was to make a London trip, came to see us in Warri.

“The next day, we sent a family friend to help pick up our son since he was the only person in Lagos and take him to the hospital. When he got there, he panicked, pointing out that he doubts it’s a football injury as the school claimed. He said the boy couldn’t stand because his waist was bent and swollen along with one side of his belly. His mouth was black. I asked, ‘is this really a football injury?’ He was taken to my house in Lagos but couldn’t sleep at night.

“I asked my eldest to fly to Lagos on November 24 while I took a trip to Asaba, from where I’d also make for Lagos. On getting there, he screamed. ‘This is beyond football injury. Come to Lagos now,’ he told me over the phone.”

Meanwhile, Dowen College, in an email sent to parents early Friday morning, stated that students should not come to school on Friday, 3rd December and Monday, 6th December because of the incident.

Reacting to the incident, Tonto Dikeh said, “Dear Dowen college, I have been informed. I’m just gathering all the facts and history of this misfortune together then we will talk. Don’t go anywhere. Our children can’t go to school to be great and end up 6feet below. God forbid. That’s not why we trust schools.”

“I could not bring myself to post the video, I haven’t even been able to watch it twice. I can’t imagine the pain this child felt, I cannot imagine. Sylvester’s life cannot be in vain, he cannot go like that,” actress Mercy Johnson-Okojie said, as this occurrence comes two months after her daughter, Purity, faced bullying in school.

Calling on the government, actress Toyin Abraham said, “How do you beat a child to the point of death? How do you wake up to the reality that the ‘living’ child you sent to school is returning to you as a corpse?

“Governor Sanwoolu @jidesanwoolu @lasgeducation please do the needful. People need to start talking. Dowen College needs to do better than that terse release.”

Reality TV star, Alexandra Asogwa, popularly known as Alex unusual wrote to Dowen college, “I tried to hold it in but I might explode if I don’t ask questions. It’s no news that bullying has been accommodated as one of the inevitable happenings in schools.

The Lagos State government has ordered the indefinite closure of Dowen College, located in the Lekki area of the state.

The decision is pending the outcome of an investigation into the death of a student of the school, Sylvester Oromoni Jnr.

The decision was contained in a statement signed on Friday by the Assistant Director, Public Affairs, of the Lagos State Ministry of Education, Ganiu Lawal.

The statement added that the State Commissioner for Education, Mrs. Folasade Adefisayo, announced the closure of the school after a meeting with the School Management and Staff.