Xmas carol: Agboke charges stakeholders, politicians to love one another 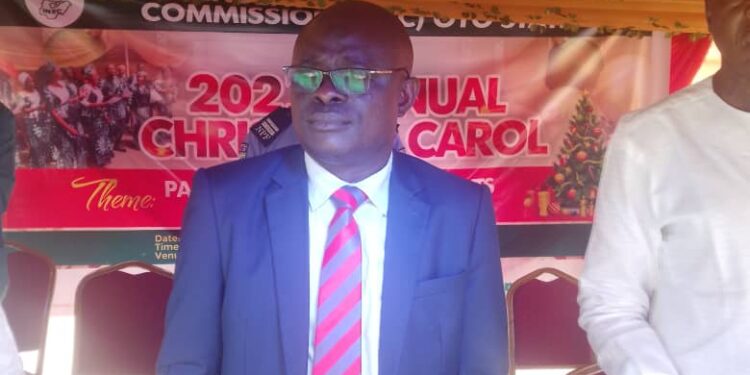 The Resident Electoral Commissioner (REC) of the  Independent National  Electoral Commission (INEC),  in  Oyo State, Barrister (DR.) Mutiu Agboke has charged  politicians, stakeholders  and people of the state  to cooperate, work together and allow peace reign supreme among one another, especially as  the  2023 elections draws nearer.

Dr. Agboke gave  the charge at the INEC 2021 Christmas Carol programme which took place at the commission’s  premises in Ibadan.

Addressing  guests and friends of the commission at the programme, Dr Agboke said  the purpose of the Carol was to show reasons and the need to  come together  as one  in the state irrespective of  religious differences.

According to him, INEC has been able to  establish the point and it is something that should continue,  just as he charged the  people   to change the narrative of hatred among one another.

He said INEC shall continue to use its platform to improve the state, adding that in 2019 the commission  assured that their votes would count and it was so.

“In government Parastatas, we are  one, whether  Muslims or Christians, that is what we have been able to achieve  today and it is something that  should continue.

“The Carol programme shows  love, commitment and togetherness which we have seen so far. We are using  this festive period to tell pur people  that the year 2022 is so close by and it is a year we need to prepare  at a full blown for the year 2023 ahead the election.

“I  urge the people to go and participate in the on going Continuous Voter registration exercise  and collect their   Permanent Voter Card ahead the  election so as to make their vote count.”.

Dr Agboke who hinted that he would not be in the state to conduct the 2023 elections appealed to stakeholders to show love to one another and allow love radiate in  their activities especially as the 2023 election is approaching.

He said  at this point, political parties should endeavour  to do a rancour free  primaries and show love  to one another adding that whether  direct or indirect primaries,  INEC is always ready to observe what the law  says.

“I want to assure you that our mandate is to conduct a free and fair elections and this will reflect the desire of the people.

“The era of  writing results and snatching ballot papers has  gone. The era we are now is the era of transparency and beavered.

My message for the people of Oyo State is cooperate and  learn how to do the right things. We now have a standard,  the votes of the people reflected the result in 2019, that is the standard of democracy.

“The era of fabricating results  ha gone, people should watch INEC, there should be collaboration among the stakeholders such that will help reflect good results.

Asked why he would not be in the state in 2023, Dr. Agboke said: “For me, I don’t  wish to be here in 2023, I have conducted an election successfully and with standard.  I should just leave when the ovation is loudest, so that there will be  more ground for others to test there worth. If I have another opportunity, I prefer to go else where., he added.

In his message and special prayers for the commission at the programme, Pastor Bayo Owoseni of the Gethsemane Prayer Ministry urged  members and staff INEC to be diligent in service in order to move  the commission forward.

Speaking on the topic, “The participation of Civil Servants  in good governance,” the clergy stressed that only sincere and quality commitment from civil servants can bring meaning development to establishment and the workers in particular.

He  then encouraged them not to join bad wagons in their various establishment  to do evil things that will slow down the pace of  progress and development.   He buttressed his message with Genesis chapter  39 verses 20 to 23.

The Carol which was anchored by popular comedienne, Lepacious Bose  had members of the Nigeria Security and Civil Defence Corps (NSCDC), Nigeria Correctional  Centre and many other  dignitaries in attendance.