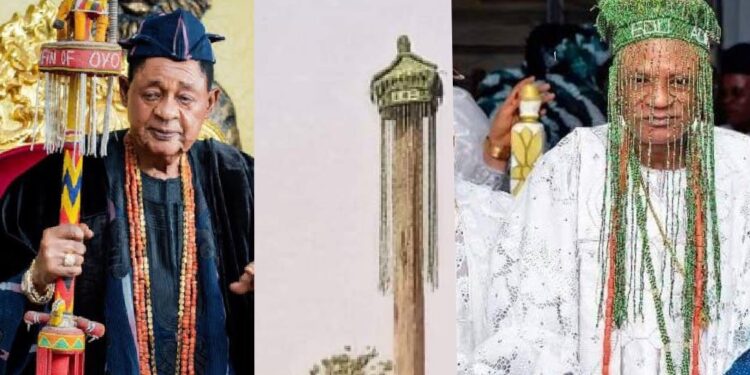 The Alaafin of Oyo, Oba Lamidi Adeyemi, has seized a beaded crown from an Ifa priest popularly known as Babalawo and also hung the crown on a tall tree after the said priest wore the crown during Ifa ceremony and paraded himself as a king.

This action was made by the Alaafin following petitions written against the said Babalawo, Ifatokun Jayeola Morakinyo (also known as Oba Edu), who was said to have worn a beaded crown during an anniversary celebration in Ifa temple and was alleged to have gotten permission to wear the crown.

In a statement issued on Wednesday by the first class traditional ruler over the incident, Oba Adeyemi said he had to take the action in order to avert violence and possible destruction of properties in Isale Oyo over the development.

The statement by the Alaafin reads: “His Imperial Majesty, Oba Lamidi Olayiwola Adeyemi III, The Alaafin of Oyo, the Permanent Chairman, Oyo State Council of Obas and Chiefs, has just averted a protest and possible wanton destruction of lives and properties in Isale Oyo community over the action of babalawo Ifatokun Jayeola Morakinyo (a.k.a Oba Edu), who wore a beaded crown during an anniversary celebration in Ifa temple and was alleged to have gotten permission to wear beaded crown.

“His Imperial Majesty, Oba Adeyemi III and the palace had been petitioned from many quarters against this Babalawo Ifatokun Jayeola Morakinyo (a.k.a Oba Edu), who is practicing Ifa in Oyo and is under the leadership of Chief Ifaleye Ikusannu, the Oluawo of Oyo.

“The babalawo Ifatokun Jayeola Morakinyo, who wore a beaded crown at his anniversary, the pictures were uploaded and trending on social media. This the Alaafin Oba Adeyemi III described as strange, unfounded lies with no substance and this desecration must stop as the Alaafin condemned the act in it’s entirety vehemently.

“The people of Oyo are very peaceful people. They have internalized religion, they have taken time to organise themselves and their societies into various religious groups. Babalawo Ifatokun Jayeola Morakinyo is not the leader of any of the Orisa religious groups in Oyo metropolis.

“After the Alaafin got wind of the action of this Babalawo Ifatokun Jayeola Morakinyo, the Alaafin activated the internal mechanism of alternative dispute resolutions that was inherited from his forebears to address this strange behaviour of this babalawo Ifatokun Jayeola Morakinyo, which is becoming a new nuisance trend among some traditional religion practitioners outside Oyo metropolis, which seems to want to creep into Oyo town through the back door.

“Information reached the palace of the Alaafin about the gathering of some aggrieved indigenes and youths in Oyo, who were about to take laws into their hands as they considered the actions of this Babalawo Ifatokun Jayeola Morakinyo as an affront and insult to the legally recognized beaded crown wearing obas in Oyo metropolis under the Alaafin of Oyo.

“The youths hence had sworn that they would go to his house, ransack it, turn it inside out and burn it down so that people who have intentions of doing same in the future would take a lesson from such actions.

“On hearing this, the Alaafin quickly sent his aides from the palace with message to the youths informing them that they should stand down as the Alaafin had taken steps and necessary measures in line with the rule of law.

“Babalawo Ifatokun Jayeola Morakinyo is under Chief Ifaleye Ikusannu, he had been summoned to the Oluawo temple, where irrefutable allegations levelled against him that he had worn a beaded crown at his ifa anniversary, which is strange to babalawos, because he is not an Oba let alone a baale and he cannot be parading himself as an Oba in Oyo metropolis.

“He was asked if it was the Aseyin of Iseyin who gave him the crown he was wearing? What jurisdiction was he administering or what local government in Iseyin is his domain? He answered in the negative.

“The Oluawo of the Alaafin of Oyo, Chief Ifaleye Ikusannu and his chiefs after asking if babalawo Ifatokun Jayeola Morakinyo will like to continue his practice in Oyo and would not want to be excommunicated, he was commanded that he must abide by the laws of the land. He was thus commanded to go and surrender his crowns including the one he wore in the trending pictures on the internet to Kudefu in the palace of the Alaafin of Oyo, which he complied with.

“The Alaafin had instructed that the surrendered crowns be nailed and hung on a stick publicly and it is the one that is hung at the Idi Ogun in the palace of the Alaafin for the public to see that no one can crown himself or wear a crown, when it is not statutory or legal with any royal lineage or a baale under the chiefs laws of Oyo State.

“This is an example for other monarchs in Yorubaland where some unscrupulous people for personal aggrandizement are parading themselves wearing beaded crowns and bastardizing Yoruba culture and tradition just because of money.

“Wherever you see youths removing fake beaded crowns from the heads of babalawos, ogbonis, Isegun practitioners and orisa traditional worshippers parading themselves as obas, the youths are protecting the Yoruba culture and tradition because, these individuals are bastardising the revered Yoruba cultures and traditions.