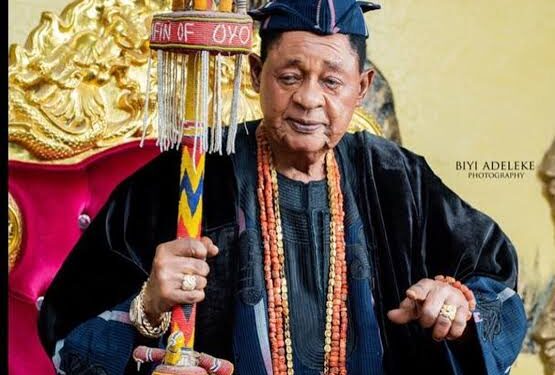 Fifty one years ago, the foremost King in Yoruba land and one of the foremost in Nigeria was crowned, the Alafin of Oyo, Oba Lamidi Olayiwola Adeyemi III, Iku Baba Yeye Alase Ekeji Orisa.

Kabiyesi, I wish you long life and prosperity on the throne.

I have seen many Kings in Nigeria but Alafin of Oyo is in a special class. Expecially in terms of cultural preservation, erudition, knowledge of history and current affairs is applauding.
I have seen kabiyesi talk extempore on Several occasion and on different subjects, his submission, undoubtedly is always full of Wisdom and knowledge.

What has Alafin got to do with Falkland Island?

One day Alafin of Oyo, came to the Governor’s office, he discussed so many things with the Governor but when the matter dovetail to issue of Education, Senator Abiola Ajimobi summoned me, we were discussing the issue of that primary school. Alafin said the School belongs to Oyo people.

I said Sir, the residents or owner of the school is not what we are looking at, but it is administratively wrong for a school to appear twice in the record of Government. I said we have similar situation in Ibadan, whereby some one will have two local Government (Ile ati Oko), but the name of a school can never appear under two local Government.

Iku Babayeye then asked who owned Falkland Island? He retorted that it is owned by Great Britain despite the great distance from Great Britain. My insistence on Geographical location falls like a pack of card on the historical submission of Iku Baba Yeye, the Imperial Majesty Lamidi Adeyemi, Iku Baba Yeye.

As you celebrate your 51st year on the throne, we celebrate you and we are proud of you. May Olodumare, the Almighty God continue to strengthen you.