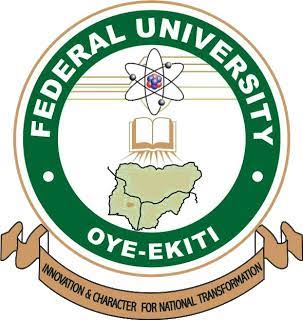 Vice-Chancellor of Federal University Oye-Ekiti (FUOYE), Prof. Abayomi Sunday Fasina, has assured that suspects arrested on Wednesday, 2nd March, 2022 by the Nigerian police in Ekiti state in connection with evil activities of secret societies, and who were allegedly identified to be students of the University, would not be spared if they are eventually found guilty of being involved in such unholy activities after proper investigation must have been conducted.

Prof. Fasina who had made known his aversion for cultism on the campus during his maiden address as the new helsman of the Ivory Tower to fresh students of the 2020/2021 academic session during their orientation exercise last August, said his administration will not spare the rod and spoil the child in matters relating to evil activities on the campus.

While hailing the police for doing a good job of apprehending the students suspected to be involved in cultism, he urged the nation’s security outfit to ensure that they carry out a proper investigation which will lead to finding out incontrovertible evidence against or in favour of the suspects regarding alleged involvement in cultism.

According to a press release on Wednesday made available to newsmen in Ado-Ekiti and co-signed by the University Public Relations Officer, Foluso Ogunmodede and Special Adviser in Media Matters, Wole Balogun, Prof. Fasina was quoted to have said: “The news that just hit the waves about suspected students of our great Ivory Tower, being allegedly involved in cultism and being arrested by the police is though disheartening, but one must appreciate the good work the police is doing in this regard. It is a promising step towards stamping out evil activities of cultism and crimes on the campuses of our tertiary institutions.

“However, we urge the police in Ekiti State to, as usual and as a matter of urgency and necessity, carry out a thorough investigation with a view to unearthing incontrovertible evidence, which could be used for or against the said five students suspected to have been involved in cultism.

“While we have set in motion our internal mechanism towards ascertaining authenticity of the studentship of those five allegedly with FUOYE, we urge the police to conduct a very thorough investigation to determine their involvement or otherwise in cultism.

” FUOYE is renown for grooming excellent students and graduates who have made us really proud by winning academic laurels locally and globally. Only last October, did one of our very fine products, a former PRO of the Students Union, Mr. Femi Williams Esan, won the Ekiti Omoluabi award, which recognized him as an excellent writer and promising future leader of our great nation. He is just one out of many of our graduates who are making us very proud in their fields of human enadeavour and blazing the trail in their academic purusits in other Ivory Towers locally and internationally.

“We cannot have from this same great citadel of learning some bad eggs that would now drag the name of the University to the mud. We will not condone such evil acts as we shall deal with such issue very decisively and in strict adherence to the relevant Regulations of the University. This is a strong asurrance.,” He said.