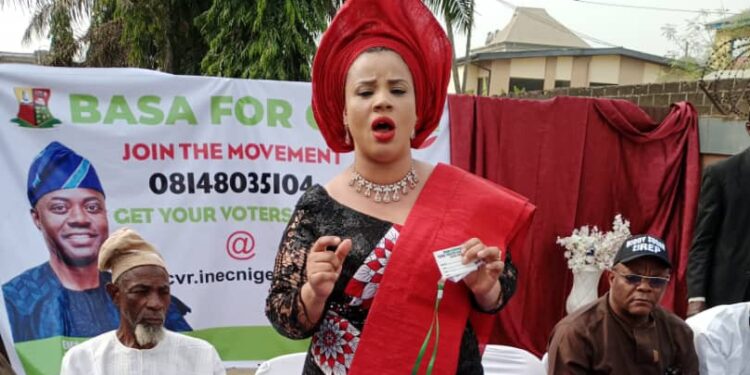 The people of Ibadan North Local Government area of Oyo State have been admonished to rally support for governor Seyi Makinde’ in order to enable him continue and consolidate on the good works he started since the beginning of his adminstration.

The admonition was given by the Senior Special Assistant on Diaspora to the governor, Honourable Bolanle Sarumi-Aliyu at the official launching of BASA Foundation, held at Oluwo NLA in Ibadan.

According to her, the adminstration of governor Seyi Makinde’ of the Peoples Democratic Party (PDP) since inception has brought a lot of positive developments and changes to the state, just as she assured them of prompt dividends of democracy in the on going adminstration of the governor.

Hon Sarumi-Aliyu who is the president of BASA Foundation said voting Makinde to continue in office beyond 2023 will be of great gain to the people and the state in general owing to his quality developmental agendas.

“You will all agree that governor Makinde’ has done so well since he came on board as governor of the state. I urge you all to rally more support for him, so that he will continue to turn around the state positively.

She appealed to them to go and get their PVC ready to enable them vote the governor back to office.

The astute politician said the objectives of the foundation is to reach out to people of the council area, and to also complement the poverty eradication move of the adminstration of governor Makinde’ adding that she has been touching and impacting lives of people through charity over the years.

“BASA Foundation is my own way of contributing to the development and wellbeing of people of Ibadan North Local Government. This development is aimed at complementing the the good gestures of the governor.”

Honourable Sarumi- Aliyu who organised free registration of Permanent Voter Card (PVC), to members of the area said four drug centres will be established in the local government area to cater for people with health problems.

“We are going to have them at Yemetu, Bodija market, Oluwo Nla, and Sango area. We are also going to carry out free registration exercise on PVC across the council area. This measure will also take care of pregnant women and children of age six.”

“We are going to give out malaria drugs, anti biotics, oral solution, and many other drugs to the people free.”

Sarumi-Aliyu who expressed gratitude to governor Makinde for the opportunity given her to serve in his administration, promised to bring dividends of democracy to them, urging them to go and get their PVC.

Party leaders and members of the PDP at the programme lauded the initiative and gestures of Hon. Sarumi-Aliyu, assuring her of their support.

They urged her to ensure even distribution of her palliatives in the council area.