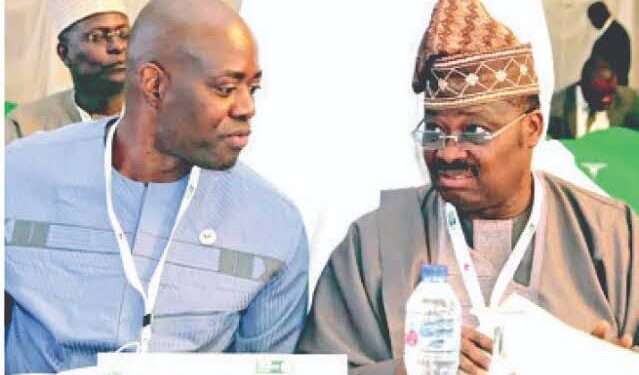 Governor ‘Seyi Makinde of Oyo State said on Monday that the inauguration of School Governing Boards for the 643 secondary schools in the state will help reinforce his administration’s achievements in the education sector.

The governor, who stated this during the inauguration of chairmen and members of the SGBs for the 643 state-owned secondary schools, also declared that all the policies introduced by his government in the education sector have been yielding positive results.

Meanwhile, the governor was represented by the Secretary to the State Government (SSG), Mrs. Olubamiwo Adeosun, at the event held at the International Conference Centre, University of Ibadan.

A statement by the Chief Press Secretary to the governor, Mr. Taiwo Adisa, quoted the governor as adding that the policies of his administration have also brought about the qualitative and sound education system currently being witnessed in the state.

According to him, such policies have led to improved access to quality education as evident in the drastic reduction in the number of out of school children and enrolment explosion in public schools as well as improvement in learning outcomes, among others.

The governor, who stated that the government is embarking on the inauguration of the SGB as a broad-based participatory management structure in the schools, said that the SGB structure is a means of attracting alternative funding sources for education in the state.

He added that it would also be a means of ensuring prudence and transparency in the utilisation of available resources for maximum impact.

He said: “It is a great honour to stand here before you today as we inaugurate the distinguished members of the Oyo State Schools Governing Boards for all the 643 secondary schools in our dear Pacesetter State.

“You will recall that at the inception of this administration in 2019, we expressed our desire not only to improve the quality of education available in the state, but also to make it easily accessible to all, irrespective of social background.

“We also made it known that we shall require and encourage greater involvement of willing and interested public and private sector stakeholders in the joint management of our schools.

“I am happy to inform you that all policies we have instituted to improve access to quality education have been yielding great dividends.

“How else shall we interpret enrolment explosion in our public schools and improved learning outcomes than that confidence is gradually being restored in public education.

“To reinforce the benefits of our reform policies, there is the need to ensure that the management of our public schools is sufficiently conditioned to administer the delivery of even more accessible quality education for the development of the state.

“This is why today we are here inaugurating a broad-based participatory management structure.”

According to Makinde, the administration has been presiding over a focused, prudent and responsible management of resources for the benefits of Oyo State people, hence the institution of the SGB is another quest to further reinforce  the achievements already recorded by the administration in the education sector.

The governor added that all sectors in the state, including infrastructure, health, security and sport developments have benefited immensely from his administration’s prudent management of resources.

He encouraged members of the School Governing Boards to see their appointments as a call to service, urging them to see the assignment as a way of giving back to the community that made them and an avenue to contribute their quota to the development of Oyo State.

He noted that with the wealth of experience of the members of the SGB, the state is reassured of more improvements in the education sector, saying: “Apart from making education totally free, recruiting teachers and supplying furniture to schools, our Government has recorded many giant strides in the education sector the mention of which time will not permit here today.

“Suffice it to say that despite all the laudable achievements, we are not resting on our oars for there is still a lot to be done. With your continued support, we are confident we will achieve the Oyo State of our dream.”

The governor also admonished the Chairmen and Secretaries (School Principals) to work together in harmony and ensure that all actions taken by the various stakeholders serve a common goal: the good of the students and the system.

Earlier, the Commissioner for Education, Barr. Abdulrahman Abdulraheem, listed some of the achievements of the administration in the education sector, including the procurement of furniture for students, appointment of 5,000 teachers and 700 education officers, purchase of science equipment.

Others, he said, include the sole ownership of Ladoke Akintola University, organisation of intervention classes for graduating SSCE students, purchase of textbooks and notebooks for students across the state, construction of over 50 model classroom buildings, among others.

“These include infrastructure, pedagogical issues and personnel. The Boards have been able to effectively harness available resources and goodwill to impact and improve our secondary school system. We thank God Almighty that every stakeholder has played and is assiduously playing the expected role very well.

“As we usher in the new set of Leadership into the School Governing Boards of 643 public secondary schools in the state, I want to urge the new Board Chairmen and Secretaries i.e. Principals to work together harmoniously and selflessly to achieve a total turnaround of our schools.”

SGB members selected to represent the three senatorial zones were presented with symbolic letters of appointment.