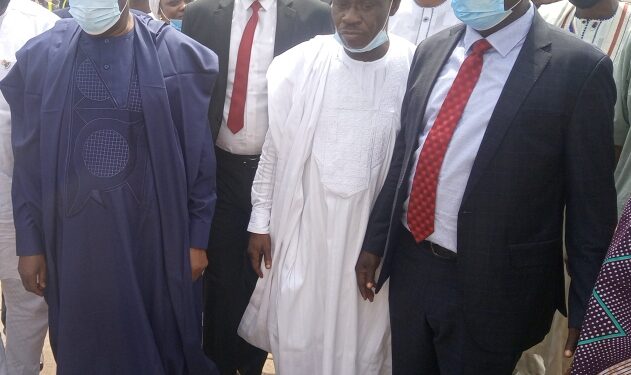 Atiku Abubakar who was welcomed at Ibadan Airport was on tour to Ogun State to officially commission some projects executed by Hon. Ladi Adebutu to mark his 60th Birthday Anniversary.

During interview with Gbolarumi’s by journalists at the Airport, the Oyo PDP chieftain said categorically that anyone who has followed him closely would have noticed his admiration for the Wazirin Adamawa, Alhaji Atiku Abubakar.

He said of all the political leaders in their mid-seventies, Atiku is his favourite, for many reasons, being a former high-ranking officer of the much maligned and impugned Nigerian Customs and Excise.

“I’m so impressed that he has since upgraded himself to an acclaimed international businessman, accomplished politician, respected educationist and benevolent philanthropist.

“Atiku Abubakar beliefs in Democracy coupled with the uncommon tenacity to pursue his dreams of leading Nigeria, since 28 years ago, beginning in 1993, when he contested the SDP Primaries against Chief Moshood Abiola, and Alhaji Babagana Kingibe. He has crisscrossed several political parties in the process and was a founding member of both the PDP and the APC, and a major supporter of Major General Muhammadu Buhari in 2015 after he lost the APC primaries to General Buhari. He returned to PDP after the 2015 elections to contest in 2019 against the same Buhari he supported heavily just four years earlier.

“Clearly His Excellency Atiku Abubakar’s time has come for someone like him who can be seen to be a unifier to emerge from across the Nigeria and heal the raw open wounds of the country. I still believe 100% in this entity and nation state called Nigeria. He has amazing prospects which we cannot let a small group of ill-informed, ignorant and malevolent persons endanger and damage. If all the constituent parts can unarguably succeed on their own, then there is good reason for keeping us together. This is because the success of many, as part of a whole, can only be geometrically and exponentially greater than the success of a small individual fraction.

“Personally, I Hazeem Gbolarumi as a Democrat, recognize and respect the rights of former Vice President Atiku Abubakar to contest for the Presidency, for as long as his will and health can stretch, but I believe Nigeria has been extremely kind to members of his generation. They have hugged and monopolised the political landscape of the country for many decades and deprived at least one highly potent and resourceful generation of a crack at running this country.

“The time has come for a complete turn-around unless we’ve signed a pact with the devil and sentenced ourselves to perpetual servitude and stress. Our youths must wake up from their self-immolating slumber and chart a new course and direction for our longsuffering country and its people. We can no longer continue to fold our arms like victims of mass hypnotism. Nigeria must be rescued by all means necessary. Whosoever is happy with the state of things in Nigeria today must truly hate our country. I believe and know that we can do much better.