Ibadan Dry Port is a game-changer for Oyo – Gov. Makinde 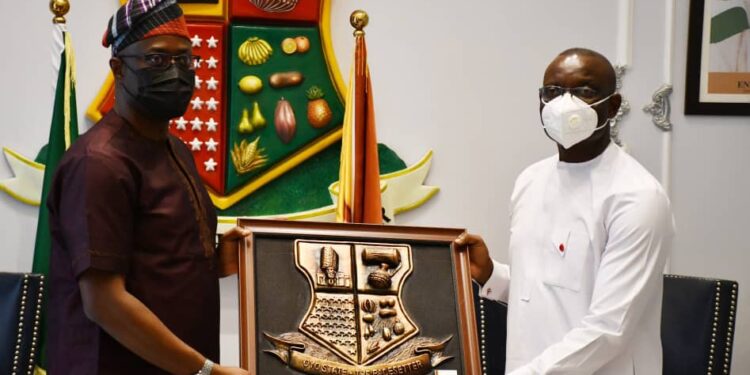 Oyo State Governor, Seyi Makinde, on Thursday, said that Ibadan Inland Dry Port is a project that is after the heart of his administration, adding that the government would do all that is necessary to ensure every bottleneck around the project is resolved.

The governor, while receiving the staff of the Nigerian Shippers’ Council, led by its Executive Secretary, Hon. Emmanuel Jime, at the Secretariat, Agodi, Ibadan, stated that he would love to see the dry port start operation almost immediately.

A statement by the Chief Press Secretary to the governor, Mr. Taiwo Adisa, quoted him as saying that his administration is eager to partner with the Nigerian Shippers’ Council and to do everything possible to achieve an early realisation of the project.

He said: “This visit is coming at a very right time. I think I can see a few faces we have met before on this. The Ibadan Inland Dry Port is a project that is after our heart in this administration.

“When we came in, we thought it was something that as we were opening the rail line, a few months after, we would be pushing the envelope as far as economic activities around the port area is concerned, but here we are.

“I listened to the Executive Secretary on the workplan, he stopped at financial closure by May next year. We want to know when this project will be a reality. When are we going to lift the first cargo from that dry port.

“Yes, I have been talking to the Hon. Minister of Transportation, and yes, the stakeholders’ engagement you talked about is important and it is sanctioned. We don’t have anything to hide in this administration.

“If we have things that should have been done on our side that are having a negative impact on the progress of this project, please let us know. We will remove those impediments almost immediately.

“If there are things that we also need to do to fast-track this project, we really want to do it; because this project is a game-changer for us. We have written to the Federal Government to give us the road from Ojoo to the Moniya Interchange. People are waiting to invest in the construction of that road.

“We don’t want to recreate Apapa here and the only way we can have the maximum benefit from that project is for us to put all the safeguards in place such that the headache from Apapa is not just transferred to this place.

“We want to be your partner and do everything for early realisation of this project. And it should not be so difficult, because I am accessible and you can reach out to me directly.”

He noted that the South-West geopolitical zone has always been strategic towards the implementation of the Council’s mandate due to the presence of the Apapa and Tin Can Island ports and other industrial activities in the zone.

Jime explained that the Ibadan Inland Dry Port is an 80,000 modular Dry Port to be developed by CRCC Construction Company with an investment outlay of USD 94.00 Million.

He said that it is located at Olorisa-Oko in Moniya and that the 875 Kilometre Lagos-Kano Standard Gauge railway is on its planned alignment.

He maintained that the Oyo State government has released the grant of the 90 Hectares of land free from all encumbrances for the project and has also committed to the development of an industrial park, access road among other facilities.