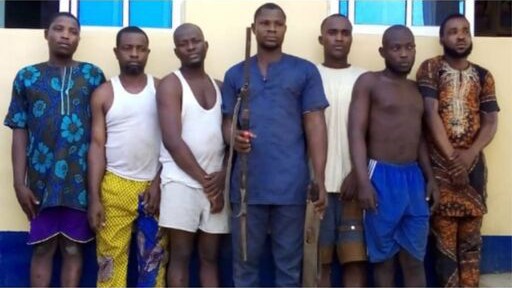 The police in Ogun State have arrested no fewer than seven men said to be members of a serial ritual killer syndicate in different parts of Abeokuta over the murder of one Sunday Okosun and three other unknown persons.

The suspects were identified by the police as Samod Sulaiman, Ifayemi Madru and Lekan Oladipupo of Sotan village; Sulaiman Aremu of Imala Elega; Shittu Saheed of Alarugbo village, Akanji Moruf of Alabata village and Tajudeen Adekunle of Sapon, all in Abeokuta.

Ogun police spokesman, Abimbola Oyeyemi, said the arrest of the suspects came after a report was lodged at Bode Olude police division by one Abraham Okosun, a brother of the deceased Sunday Okosun.

The complainant had told the police that he visited his brother, Sunday at Agbara village via Mawuko Abeokuta, only to discover that the he had been “brutally murdered by unknown person(s), and his remains had been dismembered.”

Widow who lost N5million worth of properties to #EndSars, threatens to commit suicide