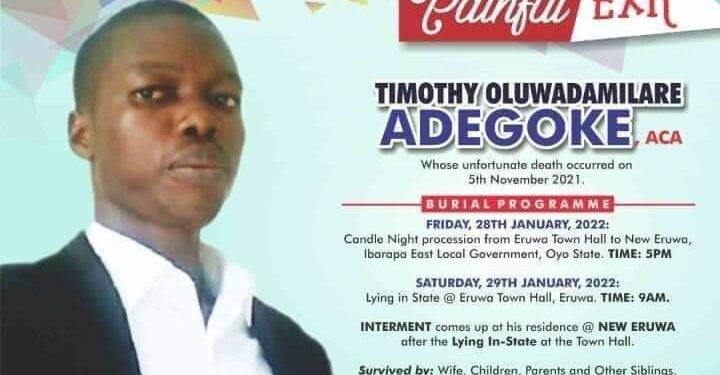 The family of late Timothy Adegoke has announced date for the final burial activities of their son.

The late Adegoke Timothy Oluwadamilare was reportedly killed at Hilton Hotel, Ile Ife when he lodged there on November 5, 2021.

According to a notice obtained by this medium and signed by his wife, burial rites will commence on Friday, 28 January, 2022 with a candle light procession at Eruwa town hall.

This will be followed by lying in state at Eruwa town hall on Saturday, 29th January, 2022 by 9:00am before interment in his house at New Eruwa.

It would be recalled that Rahman Adedoyin, the owner of Hilton Hotel where Timothy was killed has been in police custody since November 2021 and his son Raheeem Adedoyin was declared wanted by law enforcement agencies.

Meanwhile, residents of Eruwa in Ibarapa east local Government have appealed to relevant authorities to ensure the late Timothy got justice.

Lagos hotelier killed by his wife for impregnating another woman (PHOTOS)

Lagos hotelier killed by his wife for impregnating another woman (PHOTOS)