Why we support Jonathan for 2015 says youth group 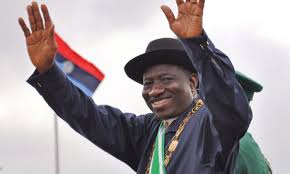 A group of youths called the Youth Movement for Change (YMC), from various geo-political zones in the country has pledged support for President Goodluck Jonathan to be re-elected for the second term.
The youths made the pledge during a press conference organised at the weekend in Ibadan, Oyo state capital themed, “Jonathan for President 2015″to sensitize members of the public about the good works of the president that are youth oriented.
Speaking at the press conference, the chairman, Mr. Tunde Marindoti stated that the youths forum is a non-partisan, professional, skilled and unskilled members who are silent majority to contribute their quota to the development of the country.
He maintained that the mission is to create a platform to determine reliable politicians that are capable to stir the ship of the country to a worthwhile destination with a vision to engender a good governance that will promote Socio-political development in the country.
Marindoti said it is on this note that they have accessed the political development of the country and resolved to pledge their support for the incumbent president for embarking on policies that favour youths like SURE-P, U-win and among others which have empowered many small entrepreneurial businesses.
He noted that Nigeria has become the largest growing economy in Africa due to technocrats in his government like Dr. Okonjo Iweala, Dr. Olusegun Aganga, Mrs. Allison Madueke and others that are internationally recognised saying that failure to re-elect him may spell doom for the country.
Also speaking at the occasion, the National Co-ordinator, Mr. Olalekan Osunleti said President Jonathan is a man that has proven himself competent despite challenges of insurgency and pressure from opposition parties.
Osunleti said they are giving him their support to able to do more adding that they do not give the support because of religious or ethnic reason but because he is tested and trusted, a reason they are giving him another chance.
He added that the president is youthful, energetic, loyal, ambitious, focused and amiable to weather the storm unlike aged politicians who don’t have nothing to offer but to rather draw the country backward.

S/PDP mourns Martins-Kuye’s death, Says “one of its strongest pillars is gone”