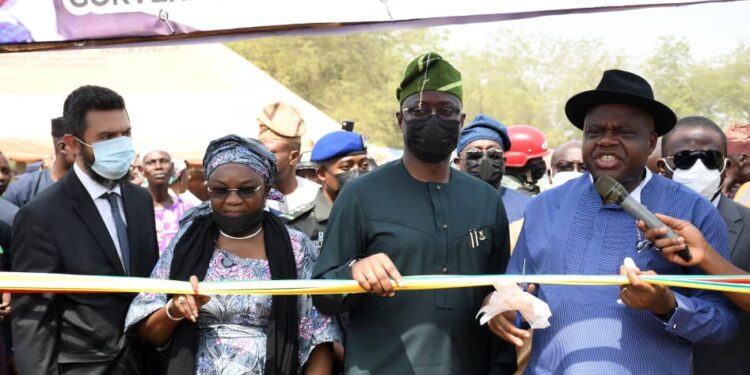 The duo of Diri and Olunloyo, who spoke severally at the two events, lauded Makinde’s courageous and quality leadership in Oyo State.

Diri had noted that the infrastructure projects being embarked upon by Governor Makinde were highly commendable and that they showed that he loved his people, asserting that Nigeria needs the kind of quality leadership that the Oyo State governor is giving to the people of his state.

The Bayelsa governor equally commended the peaceful atmosphere in Oyo State under Makinde’s watch, saying: “I came in here this morning and all I smell is a peaceful environment. No killings and that is because the people and the government are one and on the same page.

“But can we say the same of the Federal Government of Nigeria? “They have to be on the same page with the people. When they are, there will be peace and the peace we are all looking for can only come where there is justice.”

A statement by Mr. Taiwo Adisa, the Chief Press Secretary to Governor Makinde, indicated that the Oyo-Iseyin Road would be constructed at the cost of N9.9 billion and that it will be completed within the next seven months.

The statement added that the dualisation of the Airport Road and several adjoining roads totaling 10.82 kilometres
will cost N4.9 billion.

The governor, while speaking at the flag-off of Oyo-Iseyin road held at Ojogbondu, Oyo, said that his administration will continue to build viable road networks for the state.
He explained that the road is a federal road but that the state embarked on its construction given its strategic position in its economic expansion agenda, adding that the road will be executed by Messrs Kopek Construction, through the Alternate Project Funding Approach (APFA).

He said: “As you drive in from the Oyo end of this road, you will see the amount of work that Messrs Kopek Construction Ltd. has already done on this road.

“I am sure the good people of Oyo are already seeing the benefits of this road construction. And when it is completed, it will become a vital link between the farming communities of Oke-Ogun and Oyo, providing the much-needed market linkage between these zones.

“Well, this is the official flag-off of the construction, but the contractors have been on site for five months. You can now do the maths to see if they are on course to complete their work within the scheduled one year. They have assured us that this will happen.”

Governor Makinde, who appreciated his colleague from Bayelsa State for coming to flag off the project, said the APFA model being employed by the state to fund projects has made it possible for the state to achieve so much in reducing the infrastructure deficit of the state.

“As I mentioned, Messrs Kopek Construction is handling this contract. The total contract sum which was originally N8.4 billion, was increased to N9.9 billion last month.

“As you may be aware, this is a federal road being reconstructed by the Oyo State Government. So, after consultation with the Federal Government, we were given specifications to comply with.

“For example, we had to increase the width of the road from 10.75m to 12.75m to meet with the federal government specifications.

“We are executing the project using the Alternate Project Funding Approach (APFA).

“Let me take a few minutes to talk about our approach to executing projects in Oyo State. Some people are still confused as to how we are still flagging off projects when some states are finding it difficult to pay salaries. They do not understand how we are raising Oyo State’s Internally Generated Revenue (IGR), building our economy and engineering a modern Oyo State. And so, what do they do? They go to town with stories.

“They say things like Seyi Makinde is taking on hidden debts. He is going to turn our children into slaves. The debt he is leaving, we don’t know how many years it will take for us to pay it. But all these are lies, fake news and disinformation. “Our secret to carrying on these projects is the Alternate Project Funding Approach (APFA). And I can say it’s an open secret, because from when we started using it, we have always been open and transparent about it

“With APFA, the contractor funds the project, and we pay back over an agreed period of time.

“And let me make this clear: you have my word that not one Naira will be left unpaid to any contractor under APFA at the end of our current tenure.

“For example, for this project, which was awarded in June this year, the repayment period is seventeen (17) months. This means that the project will be completed before all the repayments are made. However, the last repayment will be made by December 2022.

“So, do not allow anyone to confuse you—road construction is a big part of our engineering a modern Oyo State. The building of roads forms the foundation of the development of all other sectors of the four pillars of our governance as clearly outlined in our Roadmap to Accelerated Development in Oyo State, 2019-2023.

“You need good roads to drive to healthcare centres. Without good roads, our children cannot go to school. How will our farmers get to the markets if the roads are bad? And no matter how many vehicles we give to security agencies, how will they be able to get to people in trouble when the roads are bad?

“So, we will continue to build a viable road network for our dear state. This is the path to sustainable development.
While flagging off the road project, Governor Diri described Governor Makinde as a people’s governor, noting that his love for his people made him embark on projects such as the one being flagged off.

He said: “Sincerely, I must say that Governor Makinde is a people’s governor and a project like this is very difficult to embark on, particularly at this time in the country. It takes a man of courage, vision and love for his people to embark on a project such as this.

“So, I believe that as we flag off this road project, it will be completed at record time and by the grace of God, we will all be here to commission the project for the use of the people of this area and Nigeria as a whole.

“We are all bonded together as a people and we want the quality of leadership that Governor Makinde is giving in Oyo State in Nigeria.”

Earlier, the Commissioner for Public Works, Infrastructure and Transport, Professor Dahud Sangodoyin, maintained that works to be executed on the Oyo-Iseyin Road are in accordance with Federal Highways specification, noting that these include artworks, provision of rainfall concrete-like drains, culverts and construction of 45 span bridge over Ogoro River.

“The road will have an improvement width of 12.8 as against the usual 10.3 metres and it will also accommodate 2.75 metres shoulder on each side. It comprises 150mm, laterite, sub-base and 200mm stone base material as well as asphalt concrete wearing 50 metres thickness.

“The project has been contracted to Messrs KOPEC Construction Limited at the sum of N9,995,420,263.44k for a completion period of 12 months. This approximates a benchmark of N289m per kilometre,” the commissioner said.

Also speaking at the Airport Road dualisation flag-off, Sangodoyin stated that the project will be executed with direct funding and completed within six months.
At the flag-off of the Airport Road project, Governor Makinde, who maintained that when completed, the road would be named after former Governor Olunloyo, stressed the importance of road construction to development, noting that the dualisation would bring immense economic benefits.

The governor equally stated that the pleas of residents of the state on the state of inner roads had reached his government and that its Ministry of Works had begun to work with local government authorities to see how some of the roads could be fixed.

“Let me use this opportunity to address some of the issues our people have raised about inner roads in Oyo State. In the past weeks, you would have noticed that the Oyo State Ministry of Works, Infrastructure and Transportation, has been working with the local government authorities to see that some of these roads are fixed.

“If they have not reached your area yet, please be patient, they will get there.

“What we are doing here is engineering a modern Oyo State. We are building structures and systems that will lead to sustainable development in Oyo State. And so, we are working in such a way that whoever is coming behind, will not need to lay another foundation, but will continue from where we stopped,” the governor stated.

In his remarks, Dr. Olunloyo commended Makinde for his style of administration which, according to him, places people at the centre of his governance paradigm.