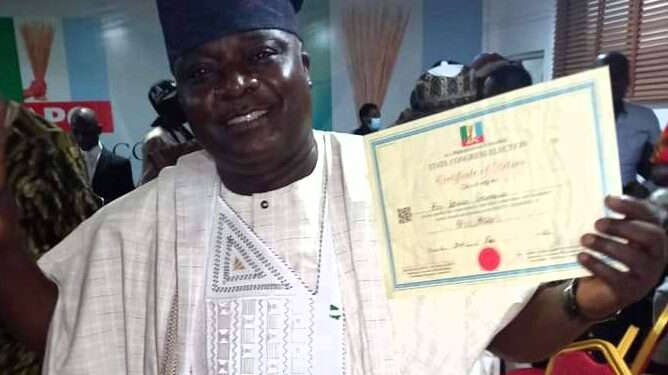 The chairman Oyo state caucus of Members of House of Representatives and chieftain of All Progressive Congress APC has congratulated the new Party executive and also the entire members of the party.

He described the process leading to the emergence of the new Party helmsmen as fair and thorough that clearly accommodated all the different political layers within APC in the state.

In a congratulatory message he personally signed, the caucus chairman, Hon Segun Odebunmi noted that he is convinced Mr Omodewu, a former two term commissioner under the late Governor Abiola Ajimobi, a party man and also from the progressive family is capable of leading the Oyo state APC to a greater height. His progressive antecedents provided enough basis to conclude that Mr. Omodewu will perform this duty creditably, with equanimity and candor. He will be fair to all.

“As the new chairman of our great party, we are happy with your confirmation and all we requested from you is that you discharge your duty with utmost responsibility and fairness. It is also now important that you work to reposition the party for victory in the coming elections”. Hon. Odebunmi enthused.

Odebunmi urged Mr Omodewu and other executive members of the party to be conscious of the fact that the APC must reclaim Oyo state in 2023 and all hands must be on deck to achieve this important agenda.

He enjoined all well meaning members of the party to accord maximum support to the Hon. Omodewu led state executives, while charging all members to be committed to the all important task of returning the party back to political leadership of the state come 2023
The statement concluded.